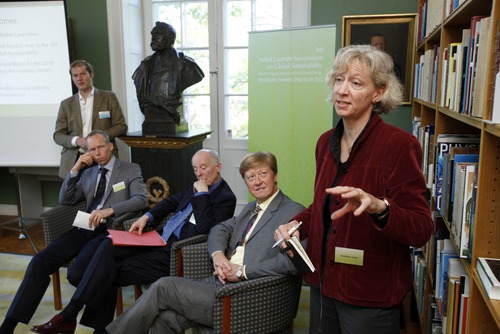 In mid May the Nobel Laureate Symposium on Global Sustainability – Transforming the World in an Era of Change —was held in Stockholm Sweden, http://globalsymposium2011.org/. Nobel laureates of different disciplines, experts on sustainability and top-level representatives from NGOs and politics met to discuss and agree on the state of our planet and what priorities are needed for a global action. The participants used a unconventional process for scientists. They staged a mock trial: Nobel Court Case: Planet Earth vs. Humanity. The arguments and conclusions of the trial were later formulated into The Stockholm Memorandum, Tipping the Scale Towards Sustainability. The document was signed by twenty Nobel Laureates and handed over to the High-level Panel on Global Sustainability appointed by the UN Secretary General.One of the things agreed on was that we humans are “now the most significant driver of global change, propelling the planet into a new geological epoch”. This epoch is called the Anthropocene. It was also concluded that “this implies that we can no longer exclude the possibility that our collective actions will trigger tipping points, risking abrupt and irreversible consequences for human communities and ecological systems”. We simply cannot continue our current way of living and continue to deny that we are in charge.

The memorandum defines eight priorities for a Coherent Global Action

This implies politicians, business and consumers need to base their lifestyle decisions on a new economic model including natural capital, ecosystem services and social aspects of poverty relief.

Panoramix View: The Stockholm memorandum will guide politicians, business and consumers all over the world in understanding how to better regulate business and how to act in a global sustainable way in B2B and B2C relations. Some consumers have already adopted this way of thinking and acting and others will quickly get the picture and put pressure on business to be transparent.  Expect citizens to demand explanations of carbon, water and bio-diversity footprints.  Consumer are quickly awakening to the fact that humans are in the sustainability driver seat and must take responsibility for their actions. As business innovates new energy technologies consumer behavior and habits will mature to create a revolution to drastically change the way we currently use/abuse resources.

As a business advisor she holds a number of board positions in Swedish and Norwegian companies and institutes. Her work is in areas related to industry, environment, research and development of the society.

Mrs. Fräjdin-Hellqvist holds a Master of Science degree in Engineering Physics from Chalmers University of Technology in Sweden and is since 2004 a member of the Royal Swedish Academy of Engineering.