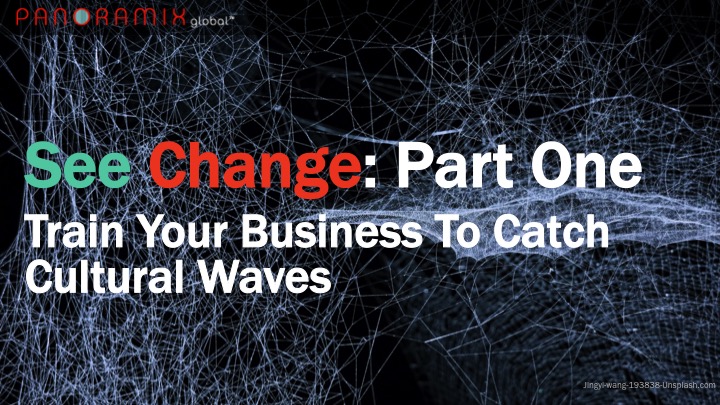 As Heraclitus said, “Everything changes and nothing stands still.”

Change is everywhere in our lives. It’s inevitable. We don’t notice changes as day turns to night and not sure what to make of change as we watch that iceberg break apart, then melt. We’ve learned about change through revolutions, conflicts and economic and natural catastrophes.

Because it is so fundamental to our physical reality, we don’t really acknowledge the changes around us very often. Even though we know that the passage of time constitutes change, we don’t always consider those shifts and adaptations that are part of it, even when those changes will ultimately have a huge impact on us.

We consider change if we look back in time, or when we live through a global event like the economic meltdown of 2008, which has been rippling around the world for nearly a decade now.

Sometimes, we only notice change when we’re touched by it personally in some major way, like a new baby, the loss of a job, or the move to a new city.

For the most part, though, we don’t think much about change. Sometimes we don’t want to think about it – especially for our business – because it’s ephemeral and transitory. In the moment, it’s hard to pin down, understand, and decide if it has any meaning for us.

Ignore change at your peril
Why think about change, and how big changes come about? Change is a critical data—an indicator of something meaningful. In practical terms, recognizing change can mean life and death for a business. Change happens and businesses thrive or die. And for some enterprises, it’s a slow painful death.
● Blockbuster took its focus off consumer demand driving the growth of Netflix.
● Kodak was eclipsed by digital cameras, then, silenced by cell phones.
● Musicland record stores were lost to a tiny device that fit in your pocket.
● Newspapers classified ads were wiped out by the non-profit—Craigslist.
The business graveyard is littered with big brands that failed to pay attention to the culture and didn’t adequately respond to change.

How did legendary brands like this miss the change coming right at them? The pace of change is clouding our vision. Every day, many elements of change take place, often outside our point of view – whether that means our changing company, changes in our category or in our geography. In modern life, the pace of change can be dizzying, due largely to how connected we now are. A hyperspeed culture has become a crisis of living.

Change overload
How do we pay attention in a world that’s in constant motion, in a place of steadily increasing noise, in the culture, as we know it now when sometimes we just want to tune it out? Moreover, how do we position ourselves to capitalize on that inevitable change?

“27% of people actively avoided watching the news after the election.” –Washington Times 11.15.17 For many, all that news was just too much.

Business Tool
Many organizations focus on change management—how to respond once change has happened. But for researchers, product developers and insights professionals, there’s a more important idea to focus on–change recognition. It is an under-appreciated business skill, a warning sign. Change recognition focuses on the customer, the culture and on external markets offering early hints about how the shifting world influences your enterprise.

Fix how you look at change
To avoid being swamped by a cultural wave and to form a robust forward-looking POV, build new institutional awarenesses. You’ll need to flex a fresh analytic muscle; one that takes into account broader cultural perspectives.

How do you do it? Examples below illustrate the complexity and dynamics of change and give specific attention to the adjacent shifts that led up to what we now know has changed.

The Roots of Change
Examining a topic on many minds today, politics and the media, we can use history to look back from the current moment to see the large cultural forces that brought us to where we are now.

As we move into the 70s, the Vietnam-era “search for truth” and investigative journalism at the Washington Post changed the course of history and defined an era. The 70s are also when the slow economic decline for the middle class began, but we won’t see this or acknowledge the impact until much later.

“Adjusted for inflation, average salaries have actually dropped since the early 1970s, while hours for full-time workers have steadily climbed.” —PBS Newshour 12.1.14

This reality will have a compounding, toxic effect over time.

The rise of right-wing radio in the 80s gives voice to more and louder conservative ideas, and in 1987 the FCC stopped enforcing the Fairness Doctrine that required radio stations to present contrasting views. This allowed for very focused programming and content. We’ll see it peak in the 2000s. Early partisanship continues to form in the media with the launch of Fox News in the 90s. Owner Rupert Murdoch tapped Roger Ailes, a Republican strategist and news exec, to run Fox News, and it became a contrast to CNN (a station some referred to as the Clinton News Network).

Mainstreaming technology in the 2000s gives rise to the blogger, the independent citizen journalist, along with a greater cacophony of opinions and ideas. Blogs like Boing Boing and Daily Kos were some of the first to launch and gain popularity. The 2000s, of course, record a devastating recession in 2008.

“At its lowest point, February 2010, U.S. employment had declined by 8.8 million from its pre-recession peak.” BLS.gov

This economic meltdown will prove to be a blow many people and families don’t recover from. The country is facing a national and global economic crisis, technology has flattened the world, we have lost entire industries to cultural and technological change. In politics, the first African American president is elected and the Tea Party is formed. Citizens react to massive change by giving voice to their deeply felt ideas and fears. MSNBC and Fox become firmly entrenched with their audiences. Fairness is only a suggestion, ideological bubbles take hold, providing safe haven.

By 2016 fake news is real, aided by Facebook, politicians, Russians, hackers, spies and people angry at the status quo. It threatens the election, truth, democracy and our way of life. We now live in a Post Truth era.

What we can learn from change
When you look back over time you can see some of the changes that manifest and compound, leading to where we are now. In that same way, you can watch your own categories and brands, tracking the building blocks and charting the cultural movements that are building. Even if the changes don’t seem to make sense right now or don’t add up in isolation, they will. That will help you understand where your world is going to go next.

Shifts in a business category provides another perspective on change

And now for some breakfast
For something on a very different point along the societal spectrum, we’ll examine how big forces can change us and the world around us in a more stable business category.

Today’s breakfast trends are not, though, due to people suddenly deciding to stop eating cereal. Change took place all across the consumer landscape, over a long period of time, resulting in this big shift in the category.

“Almost 40% of the Millennials said cereal was an inconvenient breakfast choice because they had to clean up after eating it.” -Mintel 2015.

A lot has been made of research that showed Millennials don’t want to be bothered to clean up a bowl and spoon. While that might be interesting, the great breakfast shift is more than that. This change took place because of multiple movements in the culture over many years, whose evidence pointed at a coming change. Let’s look at some of the factors that contributed to the decline.

Changing Attitudes and Behaviors in Health
Low carb diets started cereal’s slide, then morphed into Paleo diets, then went gluten free. Access to new research revealed that it wasn’t fat that made us fat. Sugar has become the new villain. And cereal is loaded with sugar.

Indulgence
Coffee as a must-have indulgence built over a couple of decades and coffee shops became a third place replacement morning routine for caffeine and even for breakfast.

Replacements
Smoothies and now smoothie bowls are the colorful darlings of Pinterest. Leave it to screen-obsessed tech devotees that can’t be bothered with chewing to create meal replacements. Soylent is for people who care less about whole food but still need to eat.

Lifestyle
Americans’ lifestyles changed, as well. The mini-meal snack is now a thing and breakfast is “all-day”. Foods are no longer confined to day parts but are instead distributed throughout the day. Eggs, once confined to breakfast, are now part of the “put an egg on it” trend for any meal.

What we can learn from change
Change, disruption, innovation have all come together to shift a major industry from all angles –society, technology, environment, economy, politics. Using this framework to understand change is a great tool for keeping track of the culture. Breakfast is never going away. But cereal will continue to flux in the face of growing demand for clean, protein-rich, gut-healthy foods.

5 Building Blocks of Change
It is often tough to focus on the signals of change, because the change hasn’t happened to your business yet or because you can’t tell what’s important yet, but if you stay alert and change how you think about change, you won’t be caught off guard. Here are five ways to think about change for your business or your clients

1. History
Use your knowledge of the past – attitudes, industry trends and failed products – as a foundation to assemble an inventory of how your industry has ALREADY changed, and to evaluate the weak spots and areas of innovation. Begin to track the changes you can identify. Even if they don’t make sense now, they might later. This tracking will give you a deep understanding of your industry and of potential changes to come, so not every potentially important change is considered a threat.

2. Culture is Context
Change doesn’t happen in a vacuum. Nothing — brands, dictators, pop stars, societies – come into being on their own. Culture reflects nature in this way — we live in a dynamic system where each part exists in relation to the other parts. Consider the STEEP forces (Society, Technology, Environment, Economy, Politics) as a framework to understand the world.

3. Don’t Shrug Off The Obvious
Change comes from everywhere and anywhere: chaos, collapse, growth, innovation, randomness, institutional, individual, revolutionary, evolutionary. Change doesn’t have to come at you head on to swallow your business. Both Kodak and traditional newspapers were taken down by changes to the culture and the market that didn’t begin in their sectors.

4. Big change starts off invisible
Watch the fringes, the early radar, the wacky innovations. Customer suggestions and complaints, no matter how wild, are also signals of coming change.

5. Values
Watch for consumer drift. When consumer values aren’t being met, they migrate to something that better meets their needs.

The best way to understand the dynamics of change, to watch for change, is to step outside the cycle you are in. See change as a natural process. Don’t judge. Just pay attention to shifts and changes. Remember to learn and observe first, then decide what actions to take.
Part 2 will cover another example and some steps to take to start to see change and incorporate it into your business practices.