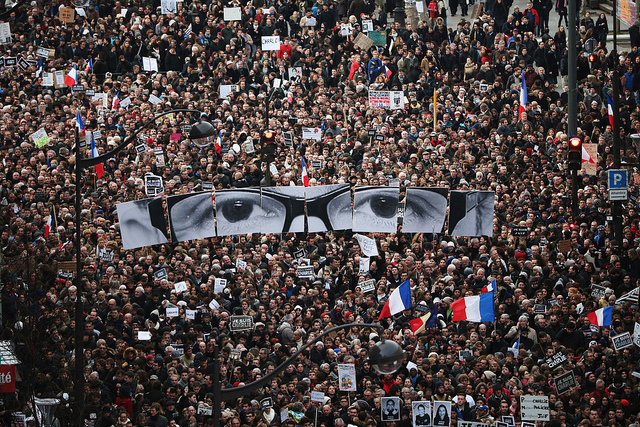 Terror Attacks Change More Than Our Need For Better Security

The events in Paris of the last several days have had a chilling effect. We regularly hear warnings of homegrown, lone wolf attacks but now we know what one looks like. We know that heinous, barbarous acts can happen anywhere in the world. At any time. What does this mean for citizens and what does it mean for consumers?

I’ve been writing and speaking about the big ideas for the coming years, and Global Uncertainty is one of my themes. It’s powerful, visceral. Head-shaking, mind-boggling global events continue to make headlines, adding to growing anxiety and creating a sense that the very culture is shifting beneath our feet. Nigerian girls are kidnapped. Pakistani school children are gunned down. A Mumbai Hotel, a Kenyan mall and an Australian coffee shop are attacked. Not to mention all the environmental disasters and the precarious economic climate. It’s an uneasy time, and bad news travels fast.

The beautiful moments of solidarity, though, are what we stand for. The days and months that follow will show how events like those of recent weeks change us. I’m going to outline a couple of themes that will underline the things people value, and will profile the consumer effect.

It’s probably safe to say that most of us had never heard of Charlie Hebdo before the massacre in Paris. But as a culture rooted in freedom and dependent on satire and comedians to deliver the truth and “real” news, we understand the loss of those voices. In the immediate aftermath, citizens, officials, celebrities take to the real and digital streets in support of Parisians holding “Je Suis Charlie” signs, creating provocative liberty themed cartoons, and sharing thoughts and images of our commitment to truth. Viewers around the world will log-on and tune in to truth-tellers with renewed appreciation and loyalty.

A global tragedy can be a unifying event. We all stand with France. The massive rally in Paris was a commitment to freedom, diversity and truth. Many cities around the world joined in solidarity with their own demonstrations. Our technological connectedness allows us to come together (and stay together) in new ways, sharing interests and priorities, strengthening our resolve and unity despite massive geographical distance. And we’ve had far too many reasons and opportunities to do that.

We want to #Bringbackourgirls. We watched Tahrir Square hoping that democracy would prevail. Australians created #illridewithyou to shield Muslims from backlash after the Sydney coffee shop attack.

Even Anonymous, the global hackers, have declared war on jihadists, vowing to hack their web sites and social media accounts. Hacking for good? Intelligence officials and hackers, sort of, on the same side will be interesting to watch.

It is this coming together that gives communities, nations and the world its strength. Citizens will be relying on the power of solidarity to keep us safe, and to make us feel safe.

The NSA surveillance scandal, Wikileaks, and Sony’s big security breakdown — cyber terror hacks are now part of our news vocabulary. After 9/11 we faced questions of security vs. loss of freedoms. Legal scholars, politicians, military experts, and citizen rights groups have been arguing about that balance for more than a decade now. If the issue ever left the front page, it’s now back front and center. How are we going to find a balance between free speech, a free society and our own personal privacy and sense of safety? In the world of big data, consumers have become very comfortable handing over information — if it means they get some tangible time or money savings in return. But moving in to the area that affects the constitution is picking a big and passionate fight. Citizens, employees, and families will be asking tough questions.

Post-9/11, the travel industry nearly collapsed. But the resilience of the citizenry and the reality of our mobility brought back our traveling ways. 9/11 and the Paris attack are not on the same scale, but the threat of terror is real, morphing and unpredictable. The US has just issued a global travel warning after the attacks in France, and in Australia and Canada, fearing reprisals for the Western led campaign against ISIS. “Attacks against Americans are becoming prevalent” is a quote that will be on many travelers mind planning the next trip. We have become accustomed to the state department travel warnings for conflict zones, but now the threat can be anywhere and everywhere, at anytime.

Multi-theocracy, multi-ethnic, multi-gender, and multi-national prevailed at the recent Paris rally, marching arm in arm. Voices in the Muslim community are denouncing the Charlie attacks with explanations of perverted theology and mismanaged governance. But this peace, too, is a fragile state. Hateful attacks also fan the flames of protectionism and fear.

Even with the global outpouring of unity there are already divisions forming along ideological lines. PEGIDA (Patriotic Europeans Against Islamisation of the West) rallies in Germany drew huge crowds even before the Paris attack. And so did counter demonstrations.

Europeans already opposed to immigration now point ferociously to evidence for their positions. And pro-diversity and immigration supporters are more committed to their mission.

We are all global citizens now; we’re more mobile and more interconnected than ever before. The migration of peoples within nations and around the world is a constant, and is now becoming a necessity as populations age and economies need more workers. Diversity and tolerance will face new challenges at every level.