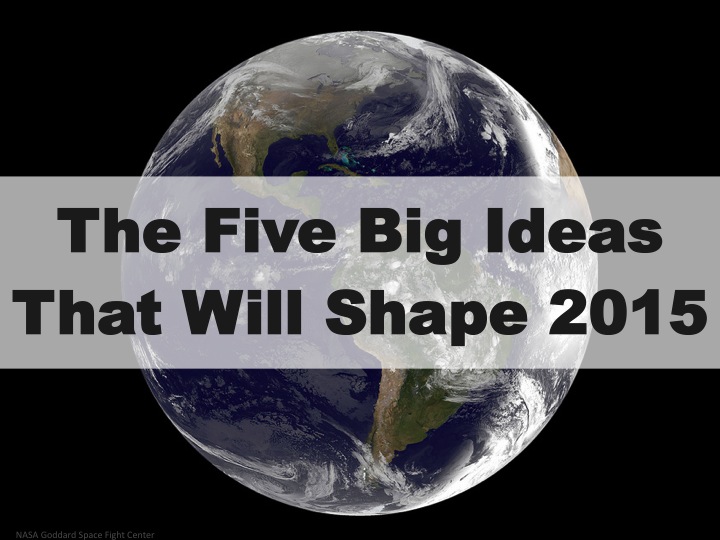 The world’s always in motion, the culture is constantly changing, and – end of the year or beginning – people are always prepared to ponder big changes for themselves and their surroundings. Sometimes, though, it seems like change “just happens.” Time passes, we encounter new ideas or new people. The culture around us slowly slides toward something new.

A few changes, though, feel more powerful, more monumental. The trends seem to be leading toward or coming from some bigger thing. When that happens, we call the changes we see around us transformational.

We want to take a look at the big ideas ­transforming the culture and the trends – in finance, technology, health, entertainment and more – to watch over the coming year.

Technology driving the future is pervasive, smart and integrated into our lives as partners on which we depend. Probably. Maybe.

The Internet of Things is upon us. Everything from our refrigerators to our traffic lights are hooked up. We now know that the NSA is monitoring. Add cops wearing cameras, drones, big data, sentient A.I., and a feeling of information claustrophobia starts to creep.

Google cars, Siri, and warehouse robots have set the stage for new smart machine helpers with the ability to learn, improve and understand task-specific contexts–think home helper robots, and hand-held interactive assistants. This coming era of non-human aid will have a profound effect on how we work, live and play.

Spectacular innovators, scientists and artists have pushed past earlier physical and imaginary boundaries making the impossible real, or at least seem real. The passion for space, science, sci-fi, and fantasy will grow fueled with optimism, excitement but tempered with a big dose of trepidation and reality.

Scientists at the Climate Summit in Peru announced that the world has reached a point of no return and that we now face a real and very present environmental danger.

Drought is spiking global food prices, and putting a focus on the 35 million tons of food waste a year in the US. Home composting will finally go mainstream and more communities will mandate countermeasures like municipal anaerobic digesters that convert food waste in to bio-gas.

Diminishing natural resources – water, energy, minerals, timber – are well documented as drivers of violent conflict around the world. The U.N. has warned that “preventing, managing and resolving natural resource-induced conflicts may well come to define global peace and security in the 21st century.”

Recycling takes a physical turn as innovators seek to capture and reuse energy expended through the body’s movement with high tech fabrics, flooring, sidewalks and shoes. Soon your quantified-self will also be collecting and reusing energy

The dream of a better life has been a societal motivator and point of national pride in the U.S. Income and wealth inequality is a threat to our economy and our culture and has become a moral issue of our time. A drumbeat has started.

Empowered and fed-up citizens are the building blocks of social revolution. Highly public, disruptive and sometimes violent demands for social and political justice will be played out across cities, freeways and national events as frustration boils over in hotspots around the nation and world. With a hand from social media, we have a feet-on-the-street view of change happening.

Women are the smart, dependable army waiting in the wings. Underutilized in the workforce, the world is waking up engage them. Japan is the first nation to publicly encourage full participation by women to repair their struggling economy. Who’s next?

Our worlds have become so tightly interconnected now that one cough spreads an existential anxious cold.

While no one really cared about The Interview, the threat cyber terrorism poses to companies, our economy and our constitution is very real. Budgets will be devoted to building rock solid defenses and new email etiquette.

No longer a fictional fear but a palpable killer virus threatened the planet and served as a wake up call to the potential for contagion. What’s really scary? Scientists are concerned about the next bird flu–more contagious and more likely to cause pandemics. Add contagion planning to preventive activities like fire drills, disaster planning and lockdown drills.

Since the beginning, we’ve been evolving, mixing, and moving around the world

Every day 10,000 baby boomers turn 65 in the US. The retiree flood is set to swamp the federal budget, deplete the labor supply, and drag the economy here in the US, as well as in Germany and Japan. Business and government need to create new models to stem brain drain and energize communities. The national discussion about immigration will shift as countries wake up to the very real need for additional talented workers to fuel the economy.

Approximately 1 in 7 people today are migrants: 232 million people are international migrants and 740 million are internal migrants. Communities are adjusting to growing complexity and diversity in their populations.

2015 Society Trend: New Feminism – Like everything, feminism is evolving. The battles of earlier years are still being fought but with new context. Stronger roles in science and engineering, the arts, technology and military are encouraging. But greater participation has exposed deep veins of discrimination, harassment and violence. The fight will continue.