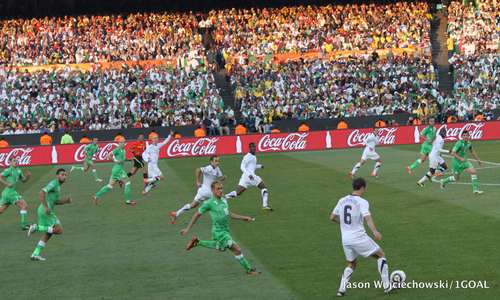 Considered a lackluster poor performer, Seabiscuit overcame many setbacks and obstacles to become a champion racehorse and a unifying symbol of hope and determination for thousands of down-on-their-luck Americans during the Great Depression. When Seabiscuit won his final race in 1940, pandemonium broke out at the track and around radios all across the country. Americans weary from the savage, decade long depression erupted with pride and renewed energy. If this underdog of a horse could defy all the odds, so could they.

Much different context but the current sports scene has had a familiar ring since the opening of the World Cup. No one expected the U.S., the latecomers to the beautiful game, to win against England. But a respectable tie allowed everyone to save face and kept American fans watching. And last night when Landon Donovan scored that winning goal against Algeria all hell broke out across the country. No burning cars (yet) but lots of beer flowing, U. S. A. chants and singing the national anthem in the streets. The Huffington Post posted fan reaction from around the nation from NYC to Lincoln, Nebraska.

The match with Ghana is still ahead and could prove a different outcome but at a time when the threat of a double dip recession is ringing in the airwaves, who can’t use a little we’re-all-in-this-together attitude?

Panoramix View: While it’s true that events like the Olympics serve up a huge helping of national pride, the U.S. is expected to be medal winners. Soccer has always been the world’s sport while we were distracted by many other national pastimes. Now that former little league soccer players are buying flat screen TVs it’s no wonder the US World Cup viewership is up. Watch for a similar phenomenon in the growing legions of lacrosse players. Who knows, Americans might even turn into true soccer fans.