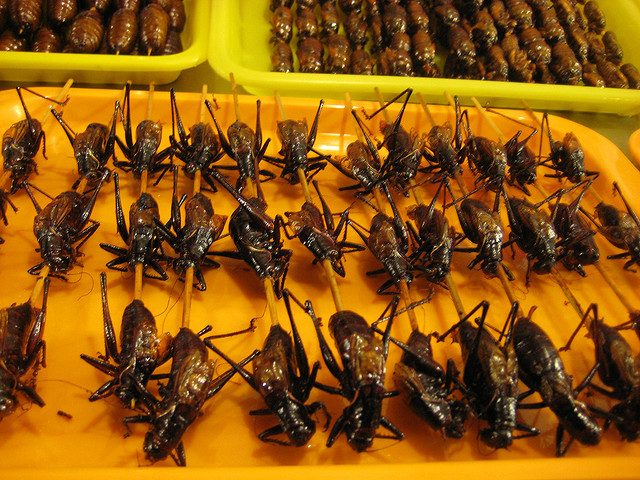 It’s all over the food news: Amid all the other dietary instructions and flavor fascinations, American consumers want more protein! Call it paleo power. But getting at the nutrients we want isn’t as simple as pulling up to a drive-through. Any discussion that revolves around the dinner plate has far larger implications. I’m quickly faced with questions of climate, science, ethics and agriculture, and I haven’t even finished making my smoothie yet.

The biggest food issue today – one that looms alongside any discussion of high-protein diets – is a race to find a way to feed a bulging planet. Gentlemen, start your blenders.

Let’s start with why there’s a need to find alternative protein sources at all. A November 1, 2014 report from the Intergovernmental Panel on Climate Change (IPCC) made alarming headlines with findings that further environment degradation will likely cause severe drought and food shortages, weakening generations of progress we’ve made in the fight against hunger and poverty. That’s just one damaging aspect of our collective lack of attention to climate change. We need to be more mindful than ever: Where and how we feed ourselves must change as the weather does.

Livestock (the most popular form of protein) is quickly becoming known as one of the big contributors to climate change. The Guardian reported that “giving up beef would reduce carbon footprint more than cars and that red meat dwarfs others for environmental impact, using 28 times more land and 11 times water for pork or chicken”. All this while a recent NPD Group finding shows that 71% of consumers want more protein in their diets. It’s time to figure out a different path.

Population growth adds even more urgency to the race for food alternatives. Fred Davies, senior science advisor at the US Agency for International Development, was quoted last April saying that the “world population will increase 30 percent to 9 billion people by mid-century. That would call for a 70 percent increase in food to meet demand. Food issues could become as politically destabilizing by 2050 as energy issues are today.”
More people on the planet means more food is needed, but it also means humans will occupy land that would have been used for agriculture, as we pile into urban areas that are sprawling into mega-cities and mega-regions.

Our dietary tastes our changing, our knowledge of healthy eating evolves, the climate morphs, and the population is in flux. But the planet’s staying the same size. Clearly status quo attitudes aren’t going to cut it. Solving our future food problems is going to require a more efficient means of producing nutritious food.

That’s where we trot out the menu of food innovation ideas: Peas, bugs, seaweed and soylent. Yum?

Pea protein is on track to become a $32 million industry. It’s highly nutritious, plant-based and perhaps most appealingly, not formerly an insect. Pea protein is already being used in beverages, snacks, bakery goods and as supplements. Beyond Meat  is one of the companies that’s slowly but successfully moving toward the mainstream with tasty soy and pea protein meat substitute products.

Maybe we westerners were just wrinkling our noses and missed this, but making use of insects as a food source is generating big-time support. The first Insects to Feed the World Conference 2014 was held last May as a three-day conference to “promote the use of insects as human food and as animal feed in assuring food security.” This highlight video is an eye-opener (and not as crawly as you might expect).

I’ve learned that there are already 20,000 registered cricket farmers in Thailand. And many of the industry’s insects are raised sustainably on nutritious waste. AgriProtein has raised $11 million in private equity to build factories that make products like Chirps, a new cricket chip, possible.

Any fan of sushi has positive associations with seaweed, but as a protein substitute it’s a tougher sell. Seaweed’s advantage over other proteins is that it doesn’t deplete our growing scarcity of fresh water because it can be grown and harvested in the sea. Much more common in the cuisines of Asia and the North Sea, landlocked cultures will have a tougher time acclimating to the taste and texture of fresh seaweed. (It’s all about mouth-feel.) Touted as a food that’s rich in vitamins and antioxidants, and one that can prevent inflammation and control estrogen levels, maybe a few Brown Sugar and Sea Salt or Roasted Sesame-flavored seaweed chips wouldn’t be so bad?

Soylent, on the other hand, is a nutritionally complete liquid food substitute (sounds delicious, right?) The substance is synthesized from hyper good-for-you ingredients, and was created by Rob Rhinehart, a 25-year-old engineer who views food as a bother rather than as a sensory ecstasy. Rob was looking to simplify his life and save time, so like any good Millennial, he started a business around his idea with crowdfunding. The pop culture reference name and anti-mainstream challenge got Soylent lots of attention and press early on, and they quickly ran low on product. Plenty of people are now blogging about their experiences of going all Soylent. (I’m sure we’ll have a Pumpkin Spice version soon.)

Closing the Loop on the Food Chain

I still haven’t found a satisfying solution to my smoothie question, but I am completely convinced that our food chain is going to have to change to solve our protein problem. Here’s how:
• Food will become an international issue and crisis
• Sustainability focused chefs will begin to incorporate bugs and pea protein into menus
• You may already have eaten a cracker made with crickets.