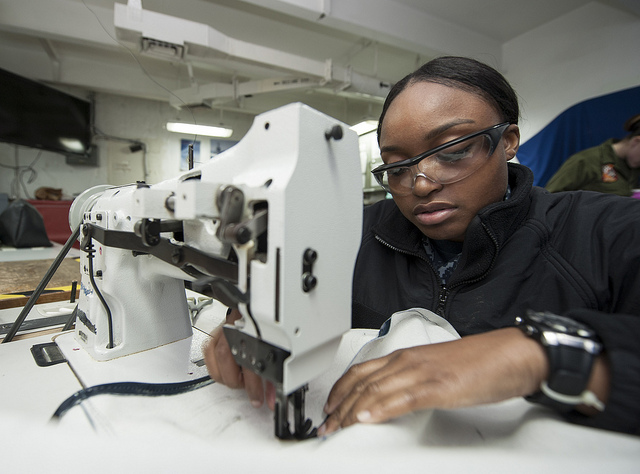 Shop Class For The New Millennium

Last spring, Accenture published a report in collaboration with the Manufacturing Institute, stating “U.S. manufacturers face reduced earnings of up to 11% annually due to increased production costs and revenue losses resulting from skills shortages.” They characterized the news as “storm clouds on the horizon that could dampen growth” just as the American economy is recovering. Great.

What’s worse, approximately 10,000 Baby Boomers retire every day, and those leaving the manufacturing industry are taking vital skills with them, leaving lines, floors, and tables idle.

Workers that grew up with shop classes and workbenches entered trades in which they could expect solid, respectable careers. Now, they’re exiting the workforce and taking decades of experience and skill with them, as businesses scramble to fill gaping experience gaps. Trades lost their luster and livelihood years ago during the off-shoring movement, as a service-driven economy took hold. Shop class vanished in school curriculums. Journeyman and apprentice programs all but disappeared as new workers looked to join a tech-first workforce.

This massive shift in the workforce isn’t just a storm, though. It’s also a chance to try something new. And some bold businesspeople are doing what they always do: Finding entrepreneurial opportunities and making things happen themselves.

From Offshoring to Re-shoring

Enter Jen Guarino. Guarino revived J.W. Hulme, a sleepy 100-year-old, made-in-Saint Paul, Minnesota handbag brand.   What did she get for her success? A business-threatening shortage of skilled cut-and-sew workers! Not waiting for anyone else to solve her problem, Jen gathered other manufacturers, educators, and non-profits to create The Makers Coalition. Together, they set up a program with a local technical school, Dunwoody College of Technology, “to build a trained cut-and-sew industry in America…to ensure the businesses that need high-quality cut-and-sewing industrial craftsmen have the talent they need to grow.”

The 6-month training program Guarino helped make happen turned out its first class in June of 2013. Its fourth class is just starting out now, with graduates ready to fill jobs paying between $12 and $18 an hour, depending on each student’s level of mastery.

Guarino and the Makers Coalition is one grassroots examples of how American companies can — and have to — turn the skills gap around. accenture” exchange=”NYSE” natural_id=”fred/company/19″>Accenture” style=”padding: 1px; color: #fff; background: #336699;” class=”forbes_entity” type=”organization” subtype=”company” active=”true” key=”accenture” exchange=”NYSE” natural_id=”fred/company/19″>Accenture[/entity] reports on how Lenovo, Caterpillar, and GE are investing for growth, signaling a return to a healthy domestic and competitive global manufacturing climate. But their reports also reveal a large-scale, wide-ranging need for skilled manufacturing talent. Organizations like The Manufacturing Institute are creating programs to introduce high school students to manufacturing careers.

Further, talking to kids at a younger age can demonstrate the advantages of a skilled labor future. The Star Tribune recently reported on an initiative that Toro has launched, offering train-to-hire internship programs for metal forming, fabrication and the operation of highly computerized machines.

Manufacturing is making something of a comeback in America. “U.S. factory payrolls have grown for four straight years, with gains totaling about 650,000 jobs. That’s a small fraction of the 6 million lost in the previous decade, but it still marks the biggest and longest stretch of manufacturing increases in a quarter century” according to the LA Times.

For some, shop class is starting to look like time well spent again, and it should get its own comeback as we give careers in trades the respect they deserve. And about that Baby Boomer experience drain? We need to rethink retirement to maximize opportunities for those with skills and experience who are ready to make a change, but not quite ready to leave the workforce entirely. The New York Times recently reported on the movement of companies to support programs transitioning retirees into non-profit positions, where their valuable skills can benefit others.

How about a transition to filling the role of leading company apprenticeship programs, acting as ambassadors to high schools, or teaching at local trade schools?

Entrepreneurs like Jen Guarino have led the way in stitching together big solutions to big problems. How many other big answers are out there, just waiting for a little careful snipping?