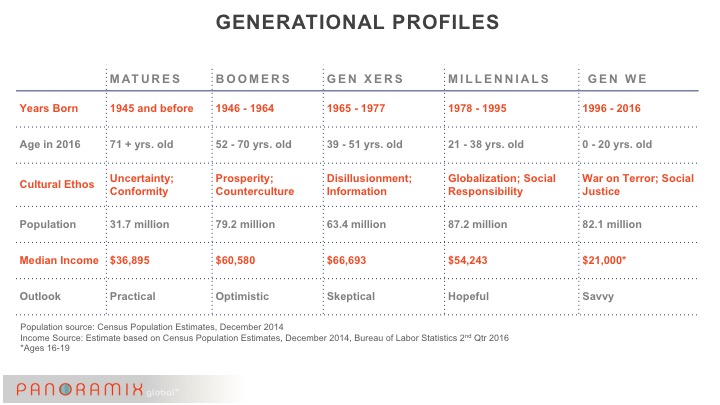 The Perfect Name For The Next Generation Of Americans

Baby Boomers. Gen X. Millennials. These cohort names get thrown around a lot. That’s because generational marketing is big business. And it makes for simpler discussions to have large groups of people grouped together in big chunks. It’s simplistic, but it’s also a helpful way to understand consumers and your customers. But what do the names of generations mean, really? How do generations get named? And what should we be calling kids today? What does the generation that’s coming up look like?

The challenge of naming an entire generation was posed recently by Jon Stewart to his guest, Paul Taylor, of the Pew Research Center, during a talk about Taylor’s new book, The Next America: Boomers, Millennials and the Looming Generational Showdown.

The Daily Show chat was not only fun, it lead to several generational names being suggested by Pew readers (along with uncovering a few telling attitudes by commenters).

Talking about Baby Boomers, Gen Xers, or Millennials leads to an inevitable question: What should we call the generational group coming up after the Millennials? Before jumping into what the youngest generation should be named, it’s worth a review of how and why other generations got their names.

Generational profiles are generalized looks at a population of the same age cohort, and they’re helpful in understanding consumer groups from a very broad perspective. Each cohort came of age during a particular period in our cultural history — they shared major societal events and cultural mores — and that shared societal background shapes their attitudes, behaviors, and worldview. In the marketing world, generations are typically delineated every 20 or so years, a span that covers a meaningful phase of life stretching from early childhood into young adulthood. Each generation carries the values, experiences and moniker throughout ensuing lifestages. Not everyone agrees on the exact years that mark the generations or the names used to describe them, but most people are in the same ballpark.

Let’s start with our oldest group, the Matures. Born on or before 1945, Matures lived through the Depression and WWII, events that marked all who lived through the 30s and 40 with an outlook of uncertainty. But post-WWII, America experienced an economic and industrial boom like the country hasn’t ever seen, before or since. Matures were happy to have life return to “normal,” to contribute to the growth of the nation, and to just plain fit in. This experience helped define them as loyal, patriotic and responsible. The name Matures wasn’t assigned until after generational marketing came of fashion, but it does resonate for a generation who grew up very early due to great sacrifice.

Baby Boomers. Born between 1946 and 1964, the fifties post-war era of Baby Boomers’ youth was a time of massive growth and prosperity. Couples could get married, own a home and have kids. Lots of kids. The Matures wanted a better life for the generation that followed them, and they sacrificed to provide it. Baby Boomers were the first generation to be marketed to as children, and the advent of television made that more than possible on a mass scale. As they grew up, especially in the 60s, this huge age cohort took part in a massive rebellion against all the rules and regulations their parents struggled hard for. Known for individuality, aspiration and idealism, they fought to make the world more just and fair.

Gen Xers were born between 1965 and 1977. There were fewer of them than there were Baby Boomers, and while living in the shadow of Boomers, it felt harder to know or understand them. Hence the name that caught on for this group has an X, signifying an unknown. Douglas Coupland, popularized the term Generation X in his 1991 book Generation X: Tales for an Accelerated Culture, and the name stuck. Gen Xers came of age during a time of disillusionment marked by the Challenger disaster, skyrocketing divorce rates, the Iran hostage crisis, institutional fraud, and the first cases of AIDS. Naturally, this group became suspicious of what they saw as phony values and the corporate greed of the 80s. But they also lived through an age of innovation that will alter history, as “information” became powerful and Gen X took to an info-rich world naturally. Long known derisively as slackers, nothing could be further from the truth; Gen Xers are recognized for their independence, authenticity, thrift, and balanced outlook on life.

Millennials. Our Millennial cohort was born between 1978 and 1995, as a new millennium was dawning. The world flattened and globalization exploded. As a result, Millennials have had more exposure to the rest of the world and feel a responsibility to take care of it—and they often hold companies and other institutions to the same standards. Their early lives are marked by foreign and homegrown terrorism of 9/11, the Oklahoma City bombing, and the Columbine shooting. But they also had the first helicopter parents to make them feel valued, secure, and hopeful. As socially responsible, diverse, and always-on tech natives, these traits are shaping the culture of the early 2000s.

Our youngest generation, those born after 1995, may not have lived long enough for us to get a full picture of what will define them. But what we know so far is that they are coming of age during the worst economic downturn since the Great Depression. Further, the U.S. engaged in an unpopular and protracted war for much of their lives.  However, this cohort will be the most diverse generation ever. Their whole world is 3-D, with technology in the palm of their hand (and the outside of their wrist or the back of their eyeglasses). Some of the names that have already been suggested and used are Digitals, iGen, Selfies, Tweenials, Hashtagers, Homelanders, Evernets, Plurals, Globalists, and 20firsters.

Who is the final arbiter, though? Ultimately, generations get named because a certain phrase gains influence, and shows enough utility to the people talking about big groups of people, that everyone can use the term as shorthand. There are many names of previous generations that didn’t ever quite make it to popularity – Generation Jones, Generation Y — and right now what to call the youngest generation isn’t quite clear yet.

I, for one, suggest we call this group Gen We. When I worked at Iconoculture, my colleagues and I believed this was the We generation for many reasons: Many generational attitudes come as backlashes against the values of previous generations – emphasizing the WE turn ideas about the Me Generation on their head. Additionally, due to technological advances, this cohort is wired and constantly connected. They’re rarely alone, even if they’re hanging out with buddies via text message, through gaming consoles or on social network sites. Their every moment is a We moment. I’ll be watching to see what other names emerge as the cohort continues to grow.

But, please, let’s just not call them the Beliebers.